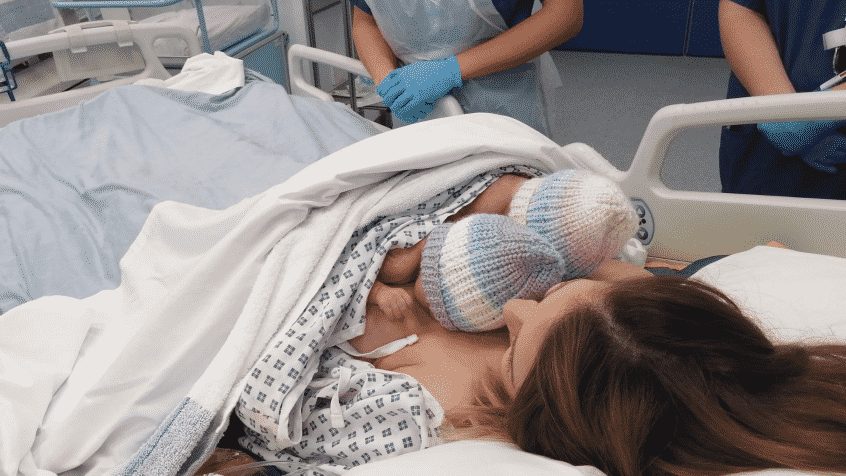 This is our story about our miracle girls…

So Chris and I have been trying to extend our family for a couple of years and unfortunately kept on getting disappointment, hurt and sadness. I suffer with polycystic ovarian syndrome so was extremely hard to track ovulation. We suffered with quite a few recurring miscarriages. We got referred to a fertility specialist for tests just to be told it was one of those things… We were determined to keep on trying and to have our final baby.

Then the pandemic hit. I was a carer at the time so we decided to pause on our family so I could concentrate on my work. This is when things began. A week after this decision I had a positive test. A VERY STRONG TEST. We didn’t get our Hope’s up as we had been here before.

We decided to travel to the window to the Womb at Bristol to have a dating scan to find out how many weeks we were and that’s where we found out. It wasn’t just one baby but TWO!

We were shocked but felt completely blessed. Most of that appointment was a complete blur as I went deaf and was starting to realise, I had to look after two babies.

When we had our 12 weeks scan, we found out they weren’t just any twins they were MCDA (Monochorionic, diamniotic).

Which meant they shared the same placenta, the same outer sac but different inner sacs. This was quite rare. We were so blessed and felt so privileged to have this chance. Not just to bring one but two babies into this world.

With these types of twins comes plenty of risks. Which resulted in a detailed scan every two weeks. I had to go through these alone. But that was ok as I knew I’d do anything to protect them. So far so good! Everything was going well. The girls were completely defying the odds, growing perfectly, no issues and no health risks.

At 20 weeks we found out we were having twin girls. A perfect way to complete our family and to make our oldest a big sister. Unfortunately, Chris was unable to attend this scan so again we booked to have a VIB 4D scan in Cardiff. We were also able to bring a teddy back for our oldest so she could hear her sister’s heartbeats. It was amazing to see our girls moving around (kicking each other in their face) they were extremely squashed at this point.

We kept on going, taking each week as it came. I was originally booked in for a c section at 36 weeks as they would not let these types of twins go any further than that due to the risk of placental rupture. This is when things changed…

At my last scan just before 35 weeks violet had sIUGR so was not growing correctly as nelly was taking all the goodness. This is when I got told I would be back at 35 weeks to deliver my little girls.

We got prepared and ready. We got told of the high chance of NICU and what came with it. We were absolutely petrified but we also knew it was the best choice to protect our girls.

We kept on going, taking each week as it came. I was originally booked in for a c section at 36 weeks as they would not let these types of twins go any further than that due to the risk of placental rupture. This is when things changed…

The girls arrived on the 20th of November weighing 3lb9 and 4lb6. Nelly didn’t need any extra care and came to the ward with me, and violet was only in NICU for 3 days! Just due to her weight and temperature. I will never forget the feeling I had walking down to her tiny cot and seeing how lost she looked but she was doing brilliantly. We were so proud of our little girls. They were small but mighty!

After 5 days we were home. We were able to become a family of 5. It was the most amazing feeling coming out with both girls and knowing they were ok, and they were safe…

Years of heartbreak and hurt had been worth it as we finally had our chance. Our TWO beautiful little miracles.

Window to the womb made it possible for Chris to be part of this journey despite the country falling apart. We owe them so much! – @themaytwins2020